Well, the “buy the dippers” are back in full force after bank earnings and Moderna (MRNA) vaccine news…

Of course, there are stocks I want to have a bullish position on, but they may be too rich at these levels.

I mean the dollar value on some of these stocks is insane and the options premiums are juiced.

I’m a firm believer that with all the traders who piled into the market recently, there are some “suckers” placing random bets.

Now, there is a way to take advantage of these “sucker bets” with defined risk…

And I want to show you the strategy I used to lock in $6K on two trades on Tuesday.*

On Tuesday, I noticed there were a lot of opportunities after it made a dip. I figured it was the same story over and over again…

Stocks take a drop and quickly rebound. That’s kind of been the theme over the last few months.

Once I noticed that I figured I would look to establish a bullish opinion on some names I’ve been watching.

However, there was still potential for a further dip. So rather than buying calls or shares outright in these names, I used what is known as a bull put spread.

For example, Lululemon (LULU) was one stock on my radar. 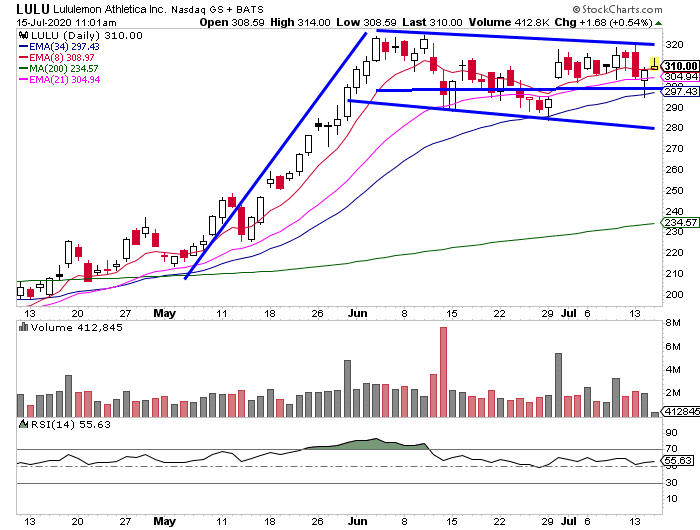 If you look at the chart above, LULU was in a bull flag pattern on the daily chart, and there were key levels that could act as support.

More specifically, I was looking at the 34-period exponential moving average (EMA) as a key support level. The 34 EMA has held before, and I figured it would hold again.

Now, there were two ways to play this…

I could’ve sold the $295 puts, while simultaneously purchasing the $290 puts.

I could’ve sold the $300 puts, while simultaneously purchasing the $295 puts.

I opted for the latter trade.

By establishing that bet, I stacked the odds in my favor, in my opinion. You see, LULU could’ve dropped a little, or even stayed sideways, I was in a position to profit. If the stock popped, I would capitalize on the drop in the put premium.

I had a high conviction and wanted to get aggressive. 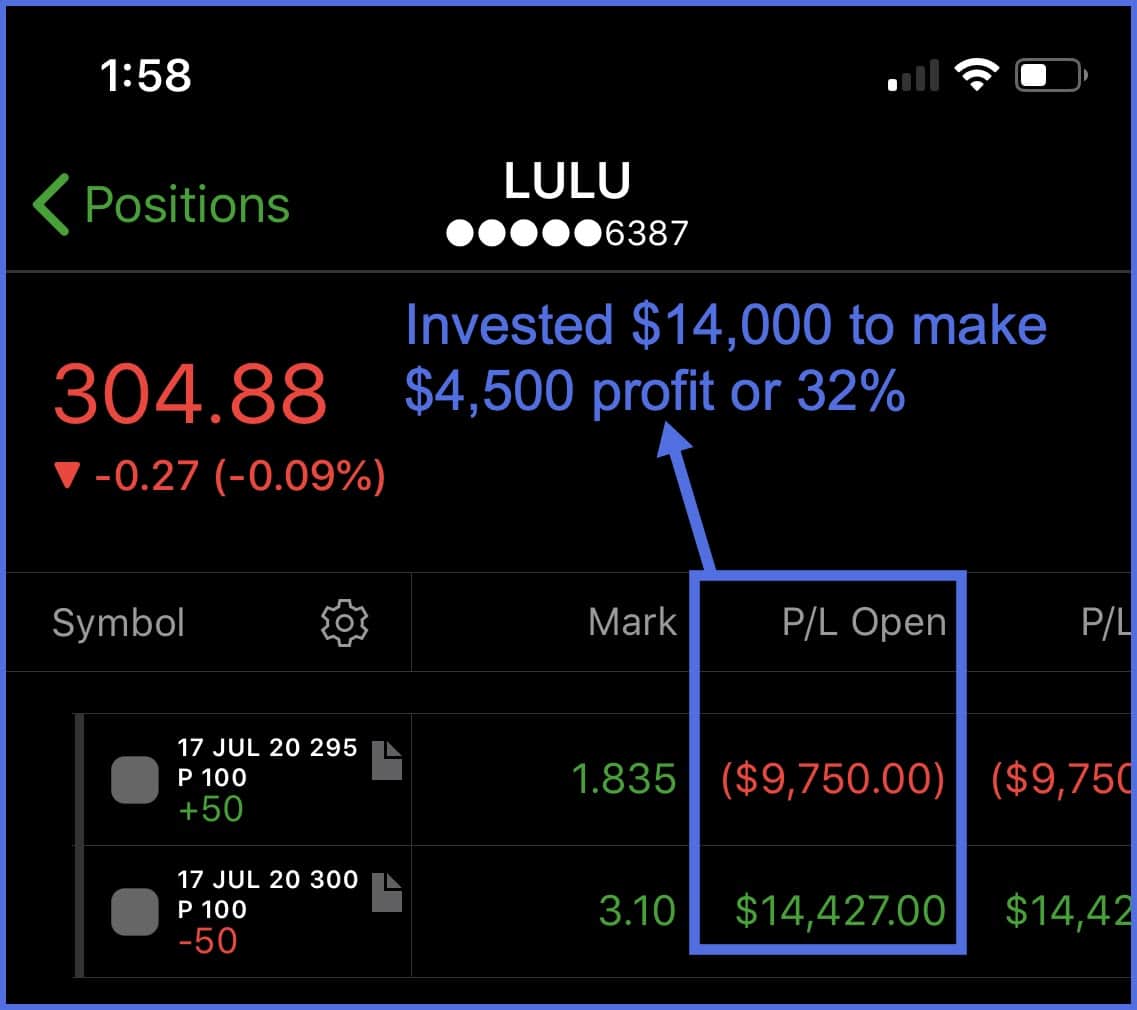 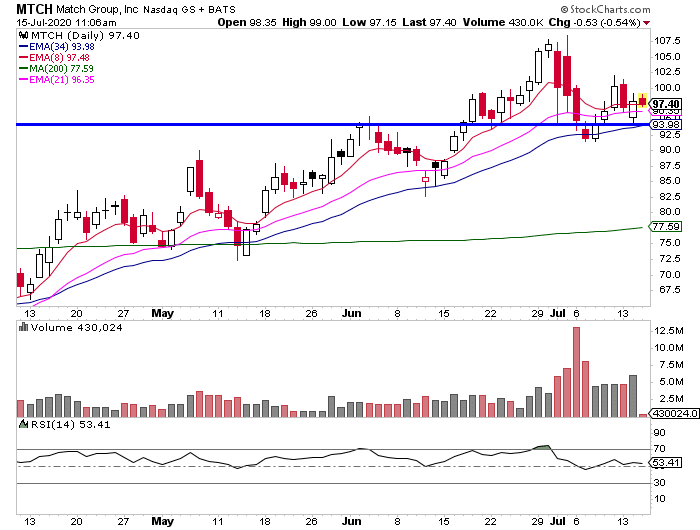 The 34 EMA has held as a support level for MTCH multiple times over the last few months, and I figured that area would allow me to establish a bullish opinion.

Basically, I believed MTCH would stay above $97… 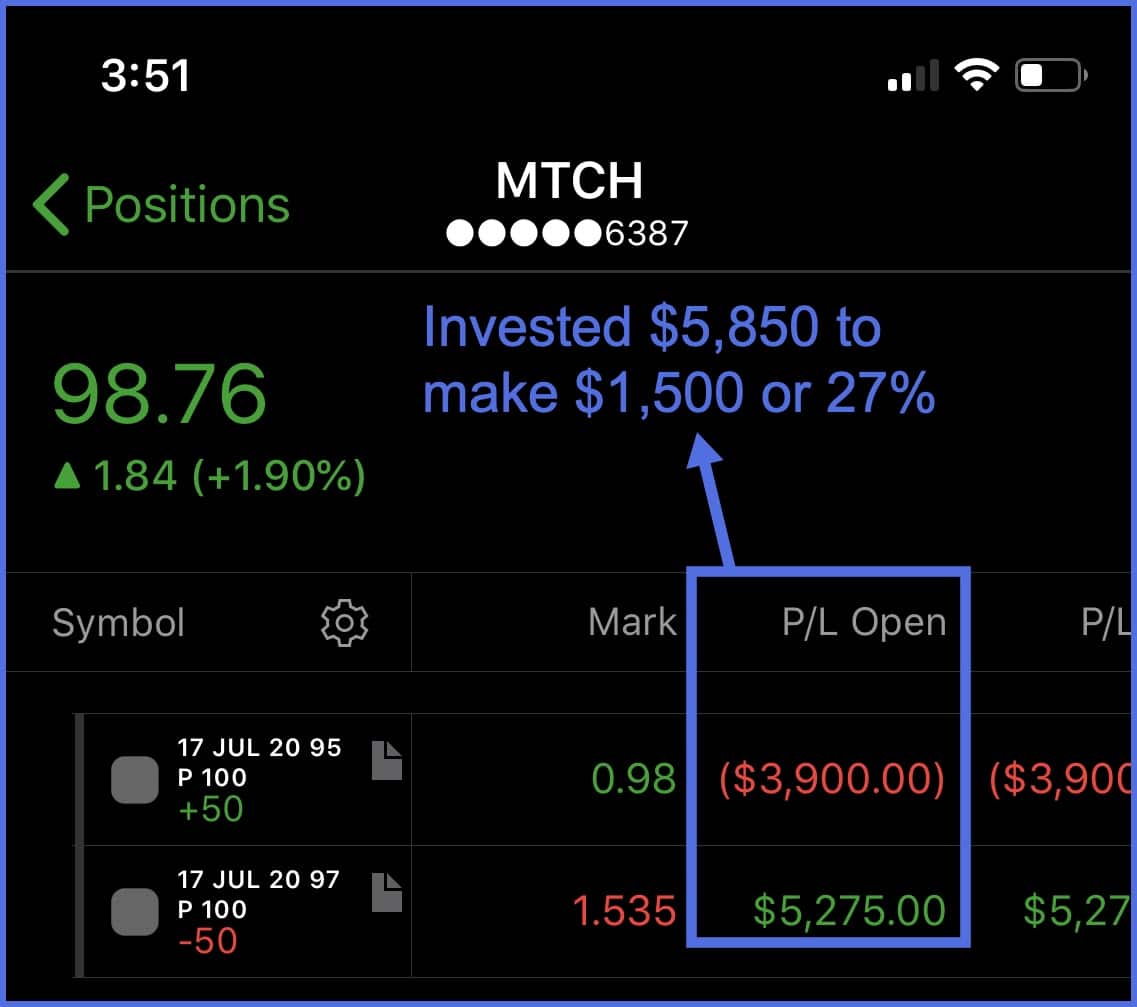 Now, if you want to learn more about this risk-defined strategy that allows me to trade high-dollar names without breaking the bank…

Then you’ll want to check out my latest eBook, Wall Street Bookie.

Inside, you’ll find case studies on my number 1 edge in the options market, and the strategy I use to take advantage of the “sucker bets”.

*Results presented are not typical and may vary from person to person. Please review our full disclaimer located at ragingbull.com/disclaimer.