Fundamentals Friday: More Than One Way to Be a Bull

I hope you had a great week of trading…

My week sure was exciting, starting with that dark-horse Top 10 finish for RagingBull driver Corey LaJoie in the Daytona 500! 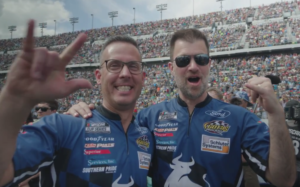 As my good buddy and RB founder Jeff Bishop likes to say… Mess with the bull, you’ll get the horns. (h/t The Breakfast Club)

And it’s back to Florida this weekend for the RagingBull Summit in Orlando!

I am JAZZED to meet so many RB members and hang with my family AND my work family!

Last week I walked you through the ABCs of buying call options as a way to make money when stocks go higher.

Today, I’d like to get back to basics again and show you another way to place a bullish trade — and a strategy I use to make big bucks in Weekly Windfalls…

In fact, I’m just off one of my best trading weeks EVER, mostly because of this strategy:

First, let me just dispel a couple of prominent myths among option-trading rookies…

To start, you don’t have to be rich or a genius to be an option seller!

If you’re new to the strategy, I would recommend inhaling as much education as you can, and maybe start paper trading or looking over my shoulder in Weekly Windfalls for a while.

Also, you do NOT have to first buy an option in order to sell it.

I know, I know — that seems to go against all logic. But it’s true.

See, when you trade options, you can either be on the buyers’ side or the sellers’ side.

Sometimes it pays to be a straight buyer, like I am in Jason Bond Picks and Jackpot Trades.

On the other hand, the odds are in the sellers’ favor — by a pretty wide margin.

That’s because most options expire worthless, which is what most option sellers want to see.

In fact, that was a big part of the impetus behind me launching Weekly Windfalls last year!

And that’s why they call it the “casino strategy,” because you’re basically trading as if you’re the house.

That said, when you sell a put option on a stock, you’re essentially betting the shares won’t go below your strike price.

So, if you sell the Tesla (TSLA) 725-strike put — a trade that generated a quick $5K win earlier this month! — expiring in three weeks, you expect TSLA shares to stay above the $725 level in the short term.

But how do you know which strike to sell?

Well, there are a few factors to consider when choosing your strike.

Most important, I’d argue, is making sure the strike aligns with potential chart support — a Fibonacci retracement level (like I used with TSLA), a round number, a key moving average, etc.

Your risk tolerance should also factor into your strike selection.

The further out of the money (OTM) your put option is (meaning the stock is trading above the strike price), the higher your odds of a winning trade.

If you’re an excellent momentum trader like me, you may be more willing to sell puts that are at the money (ATM) — meaning the stock is in line with the strike — or even slightly in the money (ITM), when the stock is below the put strike.

ITM options will command the highest premiums for sellers, due to having intrinsic value, but they’re also the riskiest.

That’s because ITM options can be assigned — so you may be on the hook to buy the underlying shares. (But we’ll touch more on how to avoid that shortly…)

When you BUY an option, your profit potential just depends on how far the stock moves in your expected direction before the contract expires.

When you SELL an option, your profit potential is determined out of the gate.

Specifically, the initial premium you receive for selling the put represents the MOST you can possibly make on the trade.

Theoretically, if that option expires worthless, you could pocket the entire net credit.

For me, though, I rarely hold a sold option through expiration.

I typically aim to hold for half the number of days until expiration. So, if I sell an option with 30 days of shelf life, I’m ready to ride them for about 15 days.

In that time frame, I also hope to capture about 30% to 50% of the initial premium I received, then lock it up.

Anyway, as with sellers of anything, option sellers are looking to SELL HIGH.

One way to tell whether option premiums are juicy is by looking at implied volatility (IV), which reflects the market’s expectation for a stock’s volatility over a certain period of time.

If short-term IV is running higher than the stock’s, say, 30-day historical volatility (HV), it means options are pricing in a bigger-than-usual move — perhaps ahead of the company’s earnings, or maybe due to broad-market fear over the coronavirus…

When traders expect a stock to be volatile, they’re willing to pay more money to sellers like YOU to buy options.

That’s because options on a volatile stock have a better chance of moving into the money by expiration, because the shares could make a monster move.

As I mentioned earlier, the deeper your sold put option moves into the money, the higher your risk of assignment — meaning you’re on the hook to buy shares at the strike price.

HOWEVER — in Weekly Windfalls, I DO NOT SELL NAKED OPTIONS.

In other words, I don’t leave myself exposed to so much risk!

Instead, I pair my sold puts with a lower-strike BOUGHT put option.

By purchasing a lower-strike put in the same series of options — i.e. – putting on a vertical credit spread — I have LIMITED MY RISK and protected against assignment. 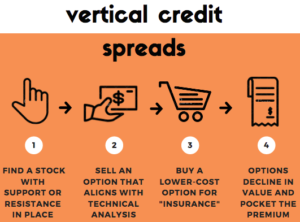 Now, before you totally freak, it’s worth noting that the VAST MAJORITY of sold options never get assigned.

But if you DO get assigned on your credit spread, you have a built-in insurance policy to limit losses.

That said, you can calculate your maximum risk by taking the difference between your bought and sold strikes and subtracting the initial net credit.

Now, I’m off to prepare for next week’s RagingBull summit in sunny Orlando!

Have a great weekend and I’ll be in touch again soon.