This week has been bittersweet thus far.

The bitter side, of course, is the stock market’s epic meltdown.

We’ll get to that shortly.

The sweet part? I’m coming off the best couple of days with RagingBull clients ever!

Not only did I get to hang out with so many wonderful members of our community, not to mention my awesome coworkers from around the country,  I got to do this…

About $10K in various bills shot into a crowd of more than 600 of RagingBull’s greatest. (You’re crazy if you miss the Summit next year!)

Also sweet: I’m also headed to Magic Kingdom with my wife Pam and our son Noah.

He’s been waiting patiently at the hotel all week, and considering how it went on Wall Street, I’m not sad to be going to Disney with our happy little man.

But if there’s one thing I heard consistently from our RagingBull members this week, it’s that they appreciate our collective honesty and genuineness.

Part of that stems from us trading with our own money and having skin in the game — our emotions are real and raw sometimes.

And part of it (for me anyway) is a deep-seated desire to continue teaching. Because when I left a job that I loved as a P.E. teacher to start Jason Bond Picks, I vowed to remain an educator… and I’d be a pretty bad one if I didn’t teach during the crap weeks, as well as the bangers.

That said, I’d like to walk you through what I learned this week from some of the other RagingBull gurus, and tell you where history says the S&P 500 (SPX) could go from here.

Plus, we’ll dive into why Weekly Windfalls is THE service to have right now.

I think it’s so cool that not only am I still learning from my own trading mentor, Jeff Bishop, on a daily basis… some former students of mine have become my teachers.

He’s absolutely crushing it in his services, and his Trading With Kyle bundle has been flying off the shelves since its launch earlier this month.

One theme Kyle teaches about that even Bishop was stranger to is trading “buckets.”

Basically, a trading “bucket” is another term for something we at RagingBull talk about a lot: your trading edge.

See, when you find a trading edge, it means you’ve found some kind of strategy or setup that works for you on a pretty consistent basis.

For me, for instance, spotting breakout patterns on momentum stocks in Jason Bond Picks was one of my first buckets, and it’s something I still excel at regularly.

Anyway, Kyle believes you should MASTER a trading edge, and then you can continue to fill that bucket throughout your career… and the more edges you conquer, the more buckets you’ll have to fill, and the more income streams in your corner.

One of Kyle’s most popular buckets is his ability to PERFECTLY TIME MONSTER STOCK MOVES, especially in the biotech sector.

And whatever he attempts to dominate next, I’m certain his bucket will fill often and fast!

Subscribers Are Bullish on Bear

Another former student of mine who is flipping the script is Nathan Bear.

Man, if any RagingBull guru felt the love during our summit, it had to be Nate!

I mean, how could you not love the guy?

Now, Nathan’s TTM Squeeze edge is well-known in the RB community, and something I’ve discussed and traded on several times.

But something else he touched on during his guru presentation also struck a chord with me and the rest of the captivated audience: The Traders’ Emotional Cycle.

As Nathan said — and something being felt during the recent sell-off — controlling the gap between your ears is 90% of the trading battle.

So knowing where you are in the emotional cycle is the KEY to going from inconsistency to consistency in your trading. 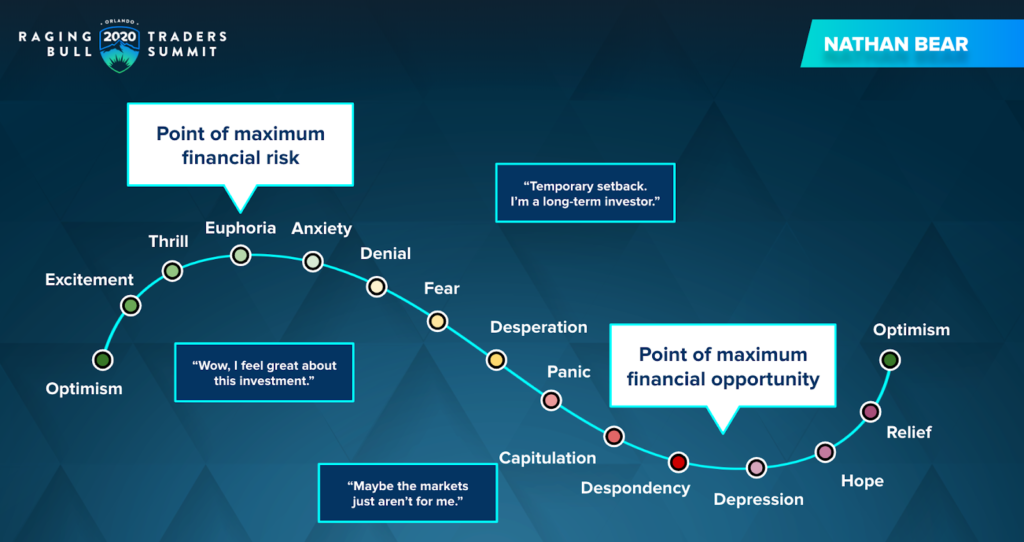 When you’re EUPHORIC about a trade you made, that’s the time to CUT YOURSELF A CHECK.

That’s because you’re most at risk financially in this stage, due to the potential for greed to take over.

On the other hand, once you’ve reached DESPONDENCY = that’s the point of maximum financial OPPORTUNITY.

Because once you flush a losing trade out and no longer have money exposed, you can begin to refocus and look for fresh setups.

The key to negating emotion in your trading is to define your risk/reward ahead of time, and be sure to keep your setups simple.

And if anyone knows how to trade with ice-cold efficiency, it’s Nathan Bear! This guy just locked up a 100% profit in not even two hours, guys and gals,

It doesn’t get much better than RB founder Jeff Bishop. 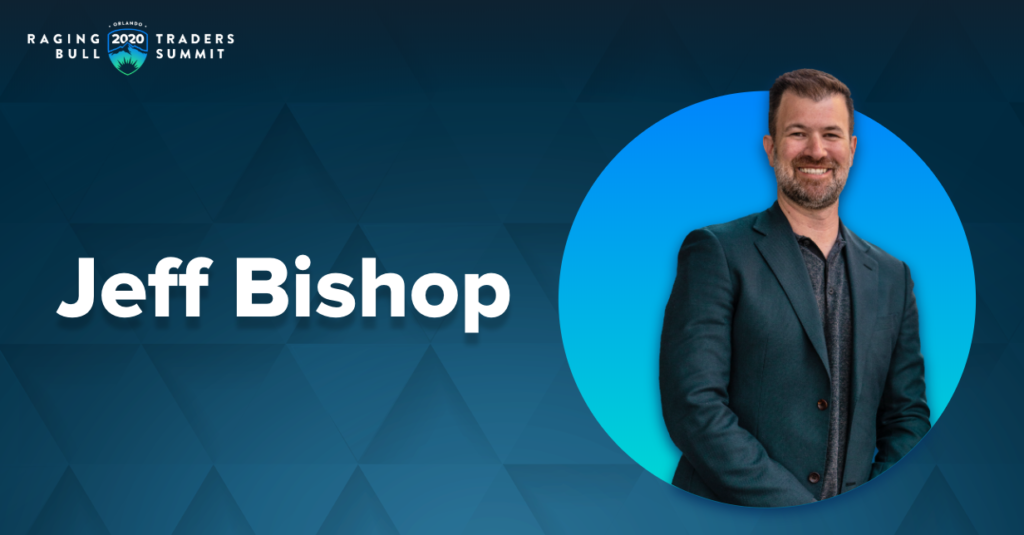 Have you ever known someone who is uber-smart and successful, but remains humble, helpful, generous, and an all-around nice human being?

Don’t you just hate that? LOL

I kid, of course.

For those of you unfamiliar with my backstory, Jeff is the guy who taught me how to trade, and he still coaches me on the regs.

He is a cerebral, diplomatic trader, too, and one you could learn a lot from if you tend to trade emotionally.

He’s been (and continues to be) an EXCELLENT trading mentor, and subscribers of his Total Alpha and Bullseye services are beyond lucky to have him in their corner.

At the RagingBull Summit, Jeff was on stage quite a bit, but three nuggets that hit home for me as a student were:

1. When you’re experiencing losses — and many traders are right now, considering the Wall Street bloodbath this week — Jeff says dial back your positions. Then, reaaaally practice patience, and don’t hop into a trade until you find those A+ setups.

2. Jeff just absolutely NAILED buying puts on SPY, because while most of us were sweating on stage as positions crumbled, Bishop cashed in a massive $80K winner. He said that it just goes to show that your trading year is usually defined by a few pivotal trades, like this one; the rest is the typical ebbs and flow. The TRICK to trading longevity isn’t taking big risks, it’s finding a strategy that’s CONSISTENT and profits more often than not. 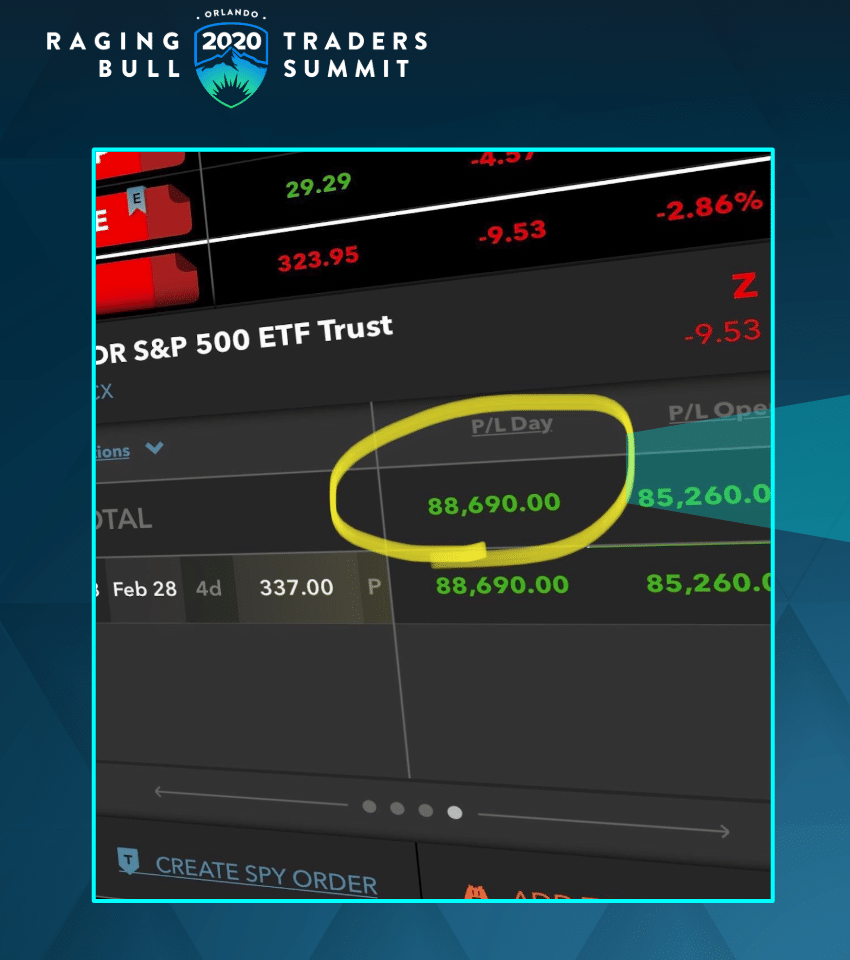 3. Implied volatility (IV) can dictate what kind of options trade he puts on. IV itself is expressed as a percentage, but whether 5% or 95%, it means nothing without CONTEXT. When IV is near the bottom of its ANNUAL RANGE, though, it means volatility expectations are running lighter than usual, which translates into cheaper options prices. And vice versa when IV is running near the top of its annual range. 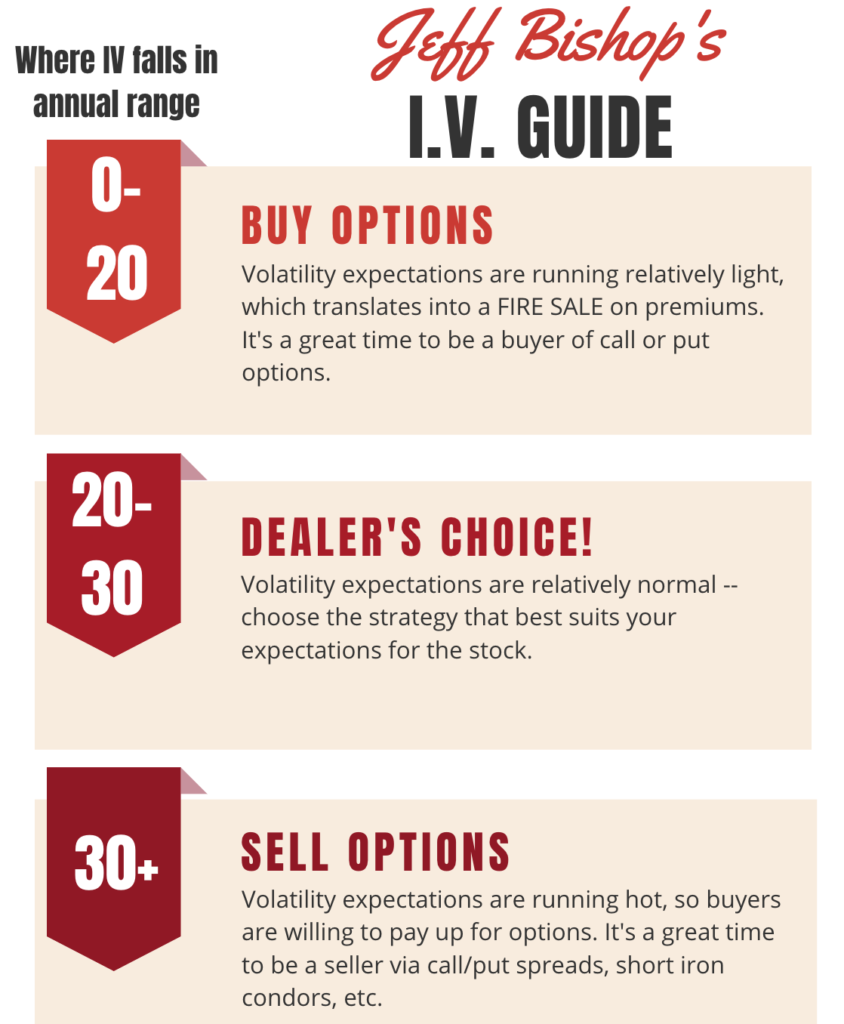 Jeff and I also agree that SELLING OPTIONS IS THE BIGGEST EDGE ANYONE COULD HAVE IN THE MARKET RIGHT NOW.

Yes, I get extremely frustrated when my bullish positions go kaput.

However, during times of market panic like we’ve seen recently, I am thankful that I sell options via credit spreads in Weekly Windfalls.

See, option sellers already have the odds in their favor, because more often than not, options expire out of the money (OTM).

Then, by putting on credit spreads — instead of selling options “naked” — my risk is defined ahead of time, which I certainly like.

But why it’s really beneficial to be a SELLER right now = fear drives up prices.

That’s because when stocks are volatile, they’re more likely to make a big swing, expanding the pool of potential option strikes that could move into the money (ITM).

However — and quite ironically — one of the biggest hurdles preventing many traders from selling options is FEAR.

They often don’t understand that unlike selling a tangible asset like a table, you don’t have to buy an option before you can sell it.

So, guys and gals, consider upgrading to my premium Weekly Windfalls service and allow me to coach you on the highest-probability trade on Wall Street.

What History Says About the S&P

So unless you’ve been hiding under a rock (don’t blame you), you probably know the S&P got walloped on coronavirus fears.

The index just wrapped up a fourth straight down day, in fact.

However, while anything can happen, history has been on the side of the bulls, in the sense that the SPX hasn’t suffered a FIVE-day losing streak since its late 2018 bottom.

After that, we all know the index bounced in a big way, and the SPY — the S&P’s corresponding exchange-traded fund (ETF) — broke through resistance in the 275 area. 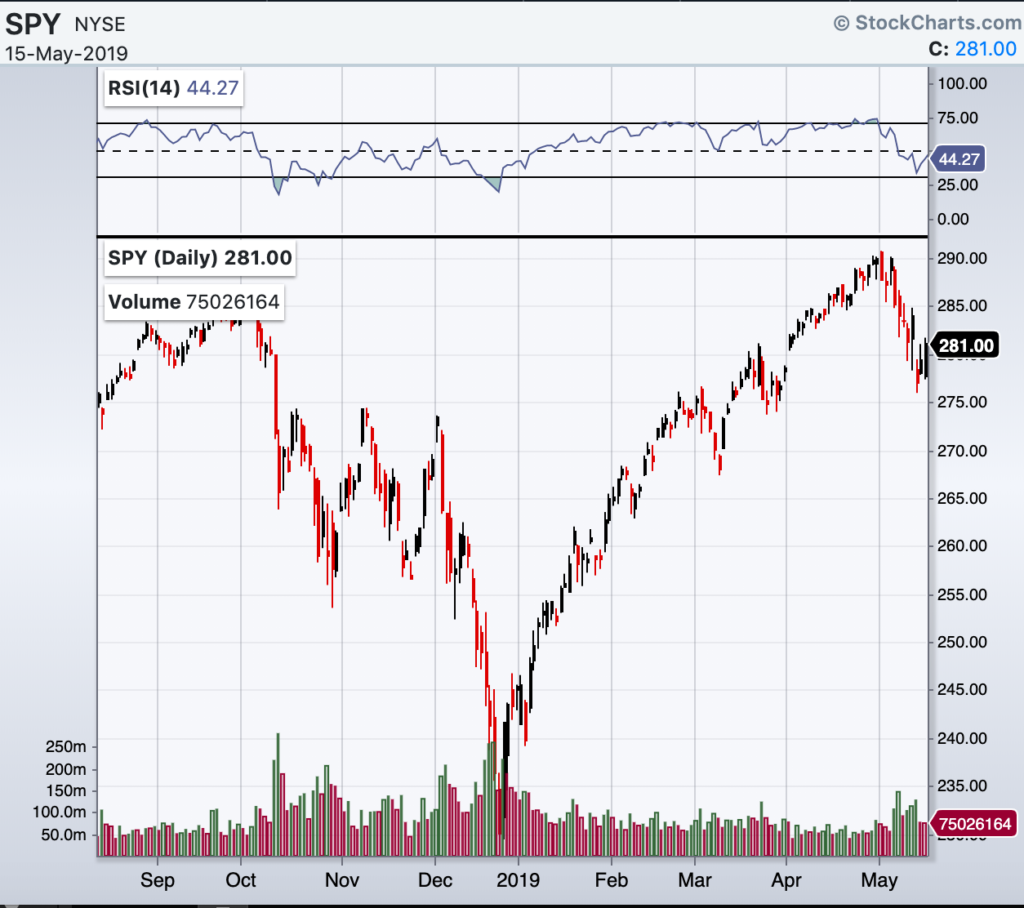 It’s also worth noting that we’re coming up on a historically positive stretch for the SPY.

And not just during the 11-year bull market.

Since 2001, the SPY has averaged a 1.2% gain in the month of March and ended the month higher over two-thirds of the time.

April has been even better, with 78% positive and the SPY gaining 2.1%, on average. 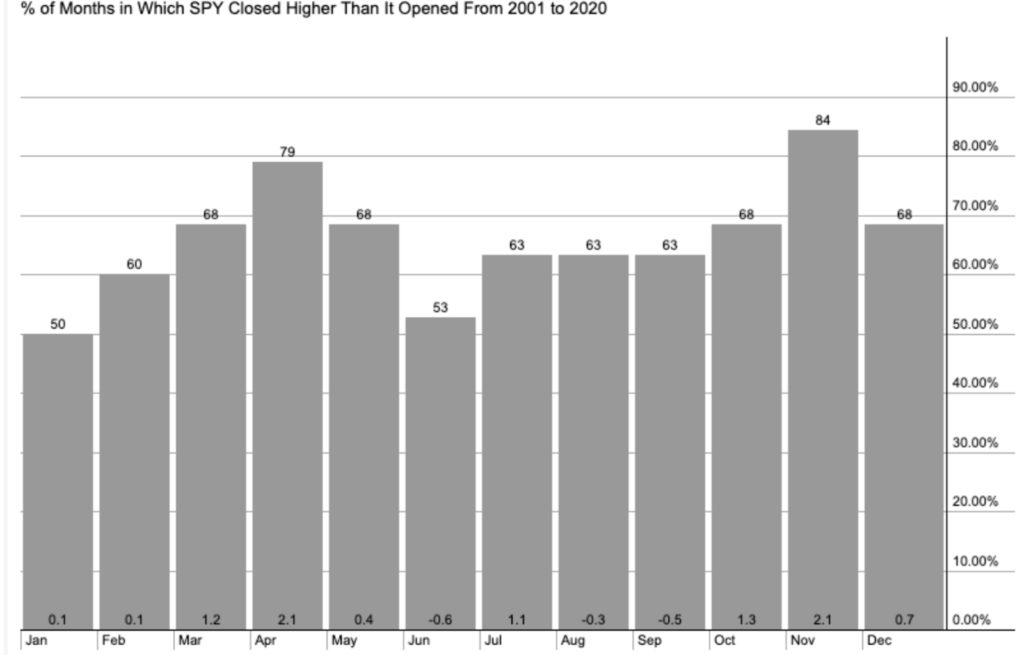 Plus, guys and gals, buying the dips had been an excellent strategy for me so far in February…

Again, we just don’t know what’s going to happen, but hopefully President Trump’s 6 p.m. ET press conference on the coronavirus helps to ease some of the fears about another black plague