My Plans For Large-Cap Momentum Stocks

With the way the market has been acting, I think it makes the most sense to buy on dips unless the price action changes.

Of course, there’s the debate tonight, but I believe the catalyst that most traders will be focused on is the potential stimulus.

When it comes to large-cap momentum stocks, there are actual risk-defined strategies that allow you to establish your bullish or bearish opinion.

Especially in this market environment, I believe it’s important to keep my options open because it can help stack the odds to my favor.

Let me show you some cheaper alternatives to “buying the dip”, and why I believe it makes sense to consider these strategies if I find a large-cap momentum stock that can take off.

Listen, I get it… large-cap stocks are expensive. I used to believe that because they’re expensive, I couldn’t join in on the action.

However, there are actually cheaper alternatives out there.

What do I mean by that?

Well, options provide leverage and there are plenty of unique ways to utilize them to make money.

For example, on Monday, I sent this out to subscribers.

Nice wins on AAPL to end last week. I’d arrived to that trade a week or so too early or it’d been a monster win. Once AAPL starts trending though, which is probably happening now, due to the iPhone rumored in October, I’ll be jumping right back in. AAPL is at about $115 this morning so I left a lot and I mean a lot ($160K potential) on the table but because I arrived to the trade too early, I felt with a week to go on the big position it was too risky for my appetite. Bottom line, I was right but slightly miss timed the entry and therefore got a small $28K win versus what wouldn’t have been significantly more.

That said, I don’t want to chase moves, but I am mindful of a trend starting so I don’t want to be super stubborn about waiting for a dip either. I will take smaller positions and try to run with the bulls here as long as they can control the trend. A big thing that’s happening this morning is the QQQ is taking back the 21 EMA, that’ll be really important to monitor for decision making. 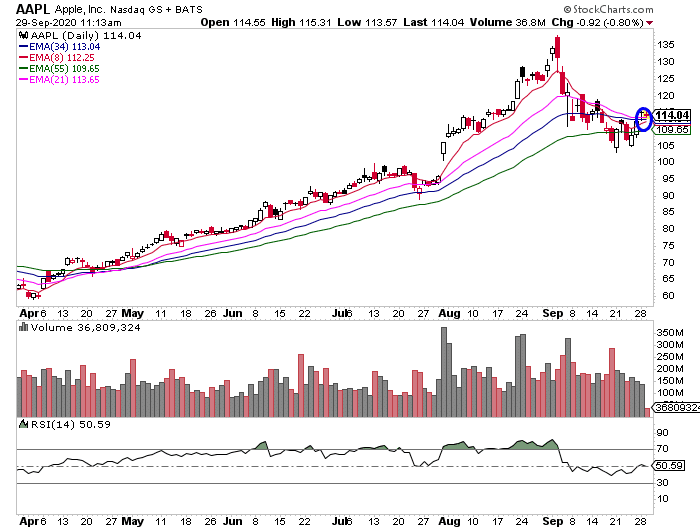 You see, around that area, there are key moving averages. The 8-day exponential moving average (EMA) is right around $112, and the 55-day EMA is just under $110.

Since I believe that area can hold up as a support level, I want to get in around there.

Of course, since the stock is above $100 a share, it’s pretty expensive. The simplest alternative is to buy calls. The deeper in the money (ITM), the more expensive. The opposite is true for deeper OTM options.

So let’s say I think AAPL can get to $125, I might look to buy the at-the-money (ATM) calls because they’re cheaper than the deep ITM calls, and the odds are better than deep OTM calls.

The thing is, selecting strike prices and target areas, as well as expiration dates, can be a little tough if you’re new to the options game.

Another approach would be to utilize a bull put spread.

I get it, it’s tough to grasp at first.

The way it works is, I identify areas in which I believe a stock won’t go below within a certain time frame.

For example, let’s say I don’t believe AAPL can get and stay below $105 by next Friday.

Well, I can look to sell the $105 puts, while simultaneously purchasing the $100 puts.

This way, if AAPL stays in range, runs higher, or even drops a little… I would be in a position to win.

Depending on my risk tolerance and conviction on a specific trade, I might look to buy calls or use the bull put spread, if I want to “buy the dip”.