When Bulls Should Wave the White Flag

U.S. markets are closed on Monday for MLK Day, so I hope you get to enjoy a long weekend.

Last week, for my paid Weekly Windfalls members, I outlined a key chart pattern to identify stocks on the verge of a breakout: the fish hook.

However, I warned that you don’t want to “bait your fish hook” too early, so to speak, because sometimes what looks like a bullish pattern forming can quickly turn into another…

Now, clearly there aren’t a whole lot of bear flags forming in an outrageously bullish (some would say too bullish) market.

But that doesn’t mean they can’t be found!

And when you spot a stock diverging from the broader market like that — making a bearish pattern while the rest of the market assails record highs — it could signal extra weakness in those shares.

So today, I’d like to outline this pattern for you and take a look at a real-life example of a FAANG-related stock on the cusp of a possible bear flag.

The bear flag is one of the most popular formations in trading.

It’s a continuation pattern, meaning it happens in the middle of a downtrend. 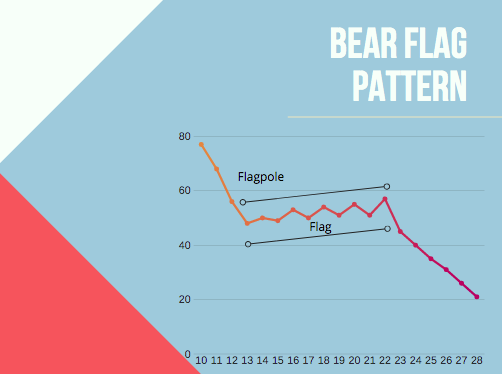 The bear flag is characterized by three things:

Ideally, bearish traders will initiate short positions right after the downside break of that narrow trading channel (the flag), as this typically precedes a steeper sell-off.

If you don’t wait for a breakout to the downside, you’re at risk for a false signal — which could turn into a fish hook (a bullish signal that I trade a lot in Jason Bond Picks).

Also, the flag portion of the pattern consists of a parallel support/resistance range. If the lines converge to the downside, it can signal a falling wedge pattern, which often indicates a trend reversal to the upside.

The flag portion will also run counter to the longer-term trend, or at least sideways, but not to the downside.

That said, let’s take a look at an actual stock that could be forming a bear flag.

Apple Supplier Could Be in Trouble

While the rest of the stock market has shown an absurd amount of strength to start 2020, Apple supplier Broadcom (AVGO) has left much to be desired.

After peaking north of $325 in late December, it was downhill for AVGO shares — which would be the flagpole, if it pans out.

The stock fell to the round-number $300 level recently — an area that acted as a ceiling several times in 2019 — and could now be forming a bear flag.

If Broadcom stock breaks the lower half of that consolidation range (the lower blue line on the chart below), and especially if it falls back below the $300 level, downside selling pressure could resume, confirming a bear flag pattern. 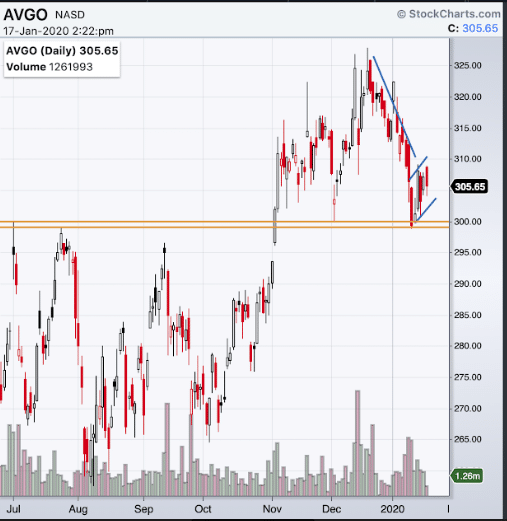 Plus, as I’ve said several times, the stock’s divergence from the broader market’s strength could be a warning sign in and of itself.

And a round number like $300 getting breached can often switch roles to act as resistance.

How to Trade a Bear Flag

Once you get confirmation that the selling has resumed — meaning the stock has fallen south of the “flag” range — there are several ways to trade a falling stock without having to actually sell the shares short.

If you want to get aggressive with it, you could buy a put option that coincides with resistance, like I do in my Smoke Signals service.

If you’d rather take a safer and (usually) cheaper route (at the expense of some possible profits), you could use the “casino strategy” that I implement in Weekly Windfalls.

The vertical credit spread is called the “casino strategy” because it has a high probability of making you money — about 70% of option trades resolve in the sellers’ favor. So, you’re essentially the house at MGM Grand.

That’s because the credit spread has three ways to profit:

The only way to lose with a credit spread is if the stock makes a big move against you, and both of your options move into the money.

To put on a bear credit spread, you would:

By default, your lower-strike call will be sold for more than the cost of your higher-strike call, resulting in a net credit on the trade. Hence the name, vertical credit spread.

This amount is the most you can possibly make, and requires the stock to stay below the sold call strike through the options’ lifetime.

Of course, you don’t have to hold an options position until expiration — most spreads are closed before that date.

The worst-case scenario is for the stock to rise above your bought call strike by expiration.

Your risk, meanwhile, is the difference between your sold and bought call strikes, minus the net credit.

Therefore, the closer your call strikes are to one another, the less money you’re risking on a max loss.

So, let’s say you put on a bear credit spread on Stock XYZ because it’s formed a bear flag and just broke support.

You think the $100 level will hold as resistance, so you initiate a bear credit spread by selling 100-strike calls and buying 102-strike calls, for a net credit of 90 cents.

You will make money as long as XYZ stays below $100.90, which is your breakeven (sold call strike + net credit).

Meanwhile, your risk is capped at $1.10, which is the 2-point difference between your sold and bought strikes, less the 90-cent credit. 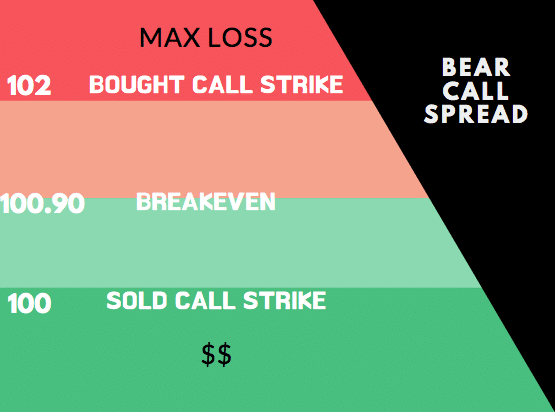 In closing, guys, and gals, I hope this helps you identify potential candidates for bear trades.

And if you’re new to options and still nervous to trade, upgrade to my premium Weekly Windfalls service and watch over my shoulder for a while!